© 2020 Coinhako Design with by @GodoFredoNinja
0 SHARES

What is Dogecoin (DOGE)?

Blockchain has a fun side as well.

The one and only Dogecoin (DOGE) is an open source peer-to-peer digital currency, favoured by Shiba Inus all over the world!

The first of its kind, Dogecoin (DOGE) was launched as a parody of Bitcoin (BTC), with the intention of injecting some fun to the blockchain space; DOGE would kickstart a string of other meme-based and "joke currencies" that now exist in the world of blockchain. DOGE was created based on the famous 'Doge' Internet meme - as shown by the Shiba Inu in the DOGE logo - and forked from Litecoin (LTC) in December 2013.

At this time of writing,

What's new at Coinhako with DOGE?

1) A Shibu Inu on the Coinhako platform!

2) A string of new trading pairs for DOGE!

The addition of Dogecoin (DOGE) on Coinhako platform brings our total number of token pairings, tradeable with fiat currencies to 34 on Coinhako. DOGE can also be traded with all other 33 support tokens with the Coinhako Swap function

Coinhako users will also have an DOGE wallet where they can Send, Receive and Store DOGE.

DOGE trading, sending and receiving is all fully supported on Coinhako Android, IOS as well as Coinhako Web.

*The information presented on this article does not constitute as investment advice and is purely for educational and/or informational purposes.

🤔If you have any enquiries, you may contact us here or you can visit our Information Page.

Did you know you can buy Bitcoin (BTC) and cryptocurrencies with Coinhako in these countries?

Introducing Harmony (ONE) on Coinhako! 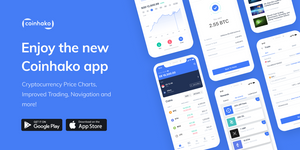 Introducing Harmony (ONE) on Coinhako!