Recently, we’ve received questions from our Malaysian users regarding a new cryptocurrency company called DinarDirham – a “decentralised gold trading platform” that claims to be an innovative new way of combining blockchain technology with the lasting and stable value of gold. On the surface, what they are doing is nothing particularly new or innovative – in fact, companies such as Digix have been doing similar things with the smart-contract based cryptocurrency Ethereum.

What also caught our attention was a post on TechinAsia: “All you need to know about Initial Coin Offerings“. In this article, the author gives a quick primer of several firms today that connect blockchain technology with gold, and mentions DinarDirham as “one of the most anticipated ICOs in 2017″. In the comments, however, there are multiple claims that DinarDirham is supposedly a fradulent enterprise. We decided to do our own research – and found some suspicious evidence ourselves. In this post, we dissect the claims made against this company – read on to find the five reasons you should be wary of DinarDirham.

1. The co-founder has had some shady business dealings.

One of the co-founders of DinarDirham is Arrai bin Ezzra:

We have found substantial proof that Arrai bin Ezzra was in fact known as Muhd Azrainuddin bin Zainal. He has since changed his name, but we could find several sources linking his old name to his current one. 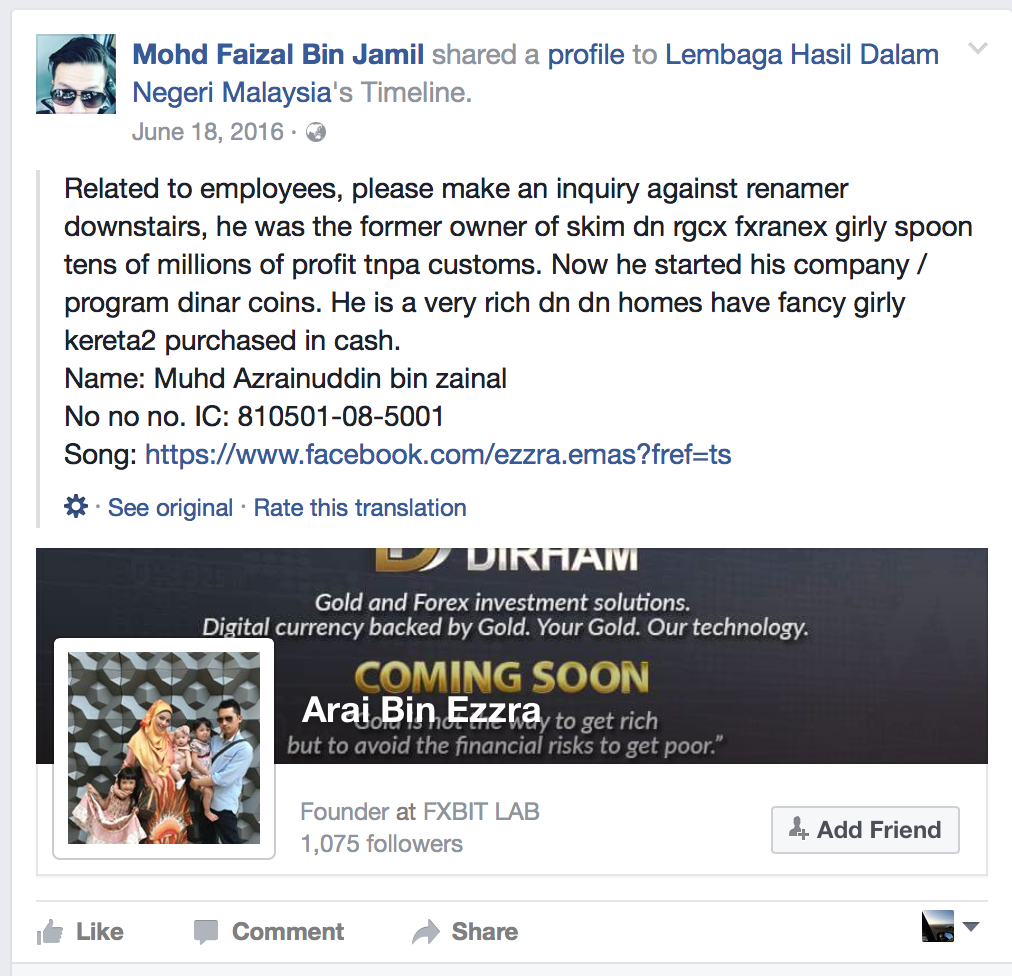 If you were to pull up a search for his old name, you’ll find a litany of complaints and reports against him, as not only a promoter of Ponzi schemes, but also an outright scam artist: on blog posts dated 2007, and on forums as recent as 2013! 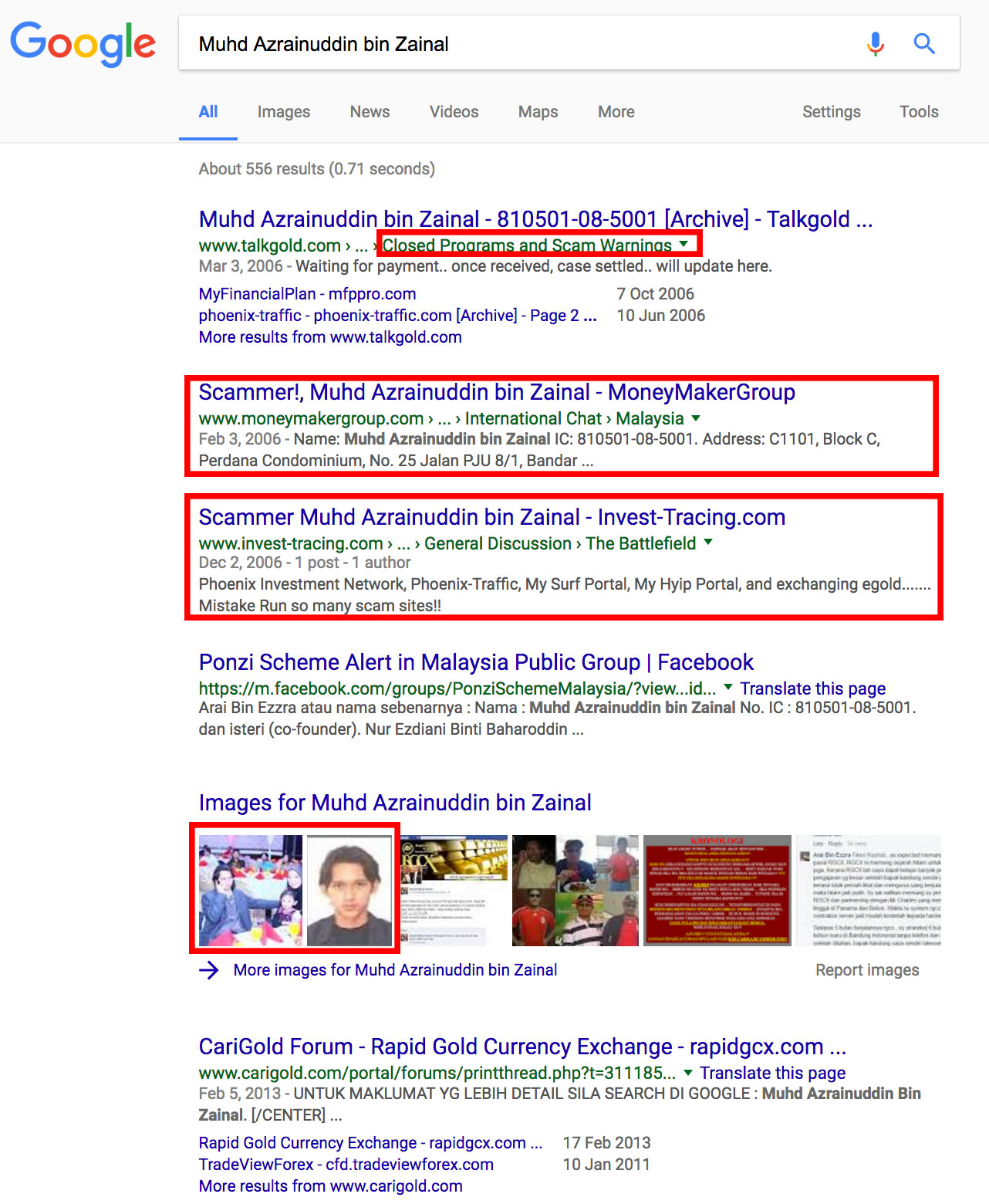 Don’t just take our word for it; Google it and find out for yourself.

It quickly became clear to us that there is a pattern – Arrai bin Ezzra has been involved with numerous scams related to gold – it wouldn’t be too much of a reach to wager that there is definitely something fishy going on DinarDirham. A known scam artist/fraudster, who has made a fortune from his past exploits, is now the CTO for a new cryptocurrency firm* that has a propietary “gold-backed” asset. Would you really have the faith to buy his token, and assume that company would have a matching amount of gold in the vaults? This discovery is what made us delve deeper.

2. It may very well be a ponzi scheme.

When visiting DinarDirham.com, you will be a greeted with a pop-up advisory:

This seems like a strange advisory that they would put out – why would Ponzi and gold buy-back schemes use the DinarDirham brand name? This is certainly strange, as this does not seem to be a problem that most cryptocurrencies run into.

After digging deeper, we may have found out why: 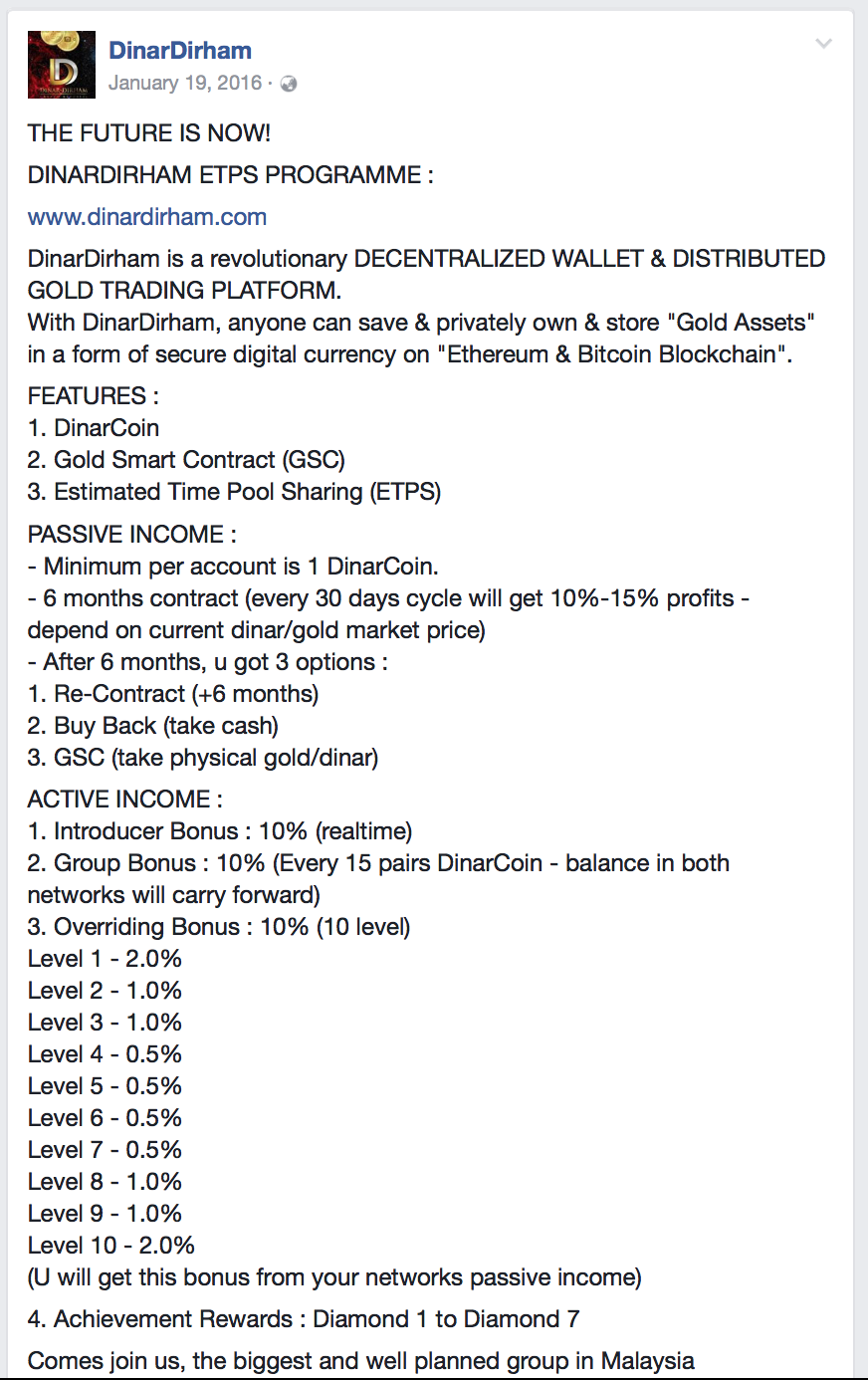 We’ve found several websites/Facebook/forum pages that introduce DinarDirham’s “ETPS Programme” which, as you can see above, sounds very much like a Ponzi scheme. Introducer/Group bonuses, a tiered bonus system, 10-15% profits – these all are hallmarks of an MLM/Ponzi scheme. DinarDirham has since attempted to disassociate themselves from such programs, but these posts remain if you search long enough. It seems likely that, as much as they claim the contrary, that they were responsible for this scheme in the first place. A Ponzi would have no benefit to using the name of another brand (and all their marketing and branding collaterals) – they may even expose themselves to greater degrees of scrutiny by doing so.

However, the big question here is: why would they introduce such a scheme, then roll it back? Our best guess would be that the company initially came under heavy fire in the bitcoin-sphere for their suspicious schemes, and decided to pull it back. One can only guess what they have in store.

3. Virtually all discussion about them online were written by the same person.

The TechInAsia post we mentioned above was written by a contributer named Steve Rogen – and from the way the post was structured, it may seem as though it was written by a regular contributer or someone passionate about cryptocurrency. However, the exact same Steve Rogen can also be found on Reddit – and all his posts were found to be related to DinarDirham!

No mention of his affiliation with DinarDirham?

Much of the information that one can find online about DinarDirham seems to indicate a highly anticipated and recognized upcoming product; however, this is not really the case, as it seems that almost all news about them were created or written by the company themselves.

4. It is doubtful whether their physical gold vaults even exist.

In this blog post, DinarDirham lists their physical gold vault locations all over the world, in places such as Hong Kong, Singapore, Malaysia, and Bangkok. However, none of the addresses actually provide meaningful locations – they are all of street names, or of places that don’t exist. For example, the Singapore vault location is as follows:

We are unsure where “Singapore Gallery” is located – we could not find any information on this location! What makes it all the more suspicious is that the phone number provided redirects you to the voicemail of an international number. All other phone numbers went unanswered when we tried dialing.

5. General reception towards DinarDirham has been less than positive.

On Reddit, and on bitcoin forums around the web, users have generally reacted to DinarDirham with very understandable skepticism. If you’re still on the fence about this new company, we would suggest doing your own research online to get a better idea of what you would be investing in. Here are some places to start:

We would like to point out that we are in no way outing DinarDirham and their products as scams. This post was written after doing research on the business and its current & past dealings; we have found many suspicious elements to this company, but we do not have definitive proof that they are running a Ponzi scheme or a scam. We recommend all users to do their due dilligence and to do their own research before investing in a new cryptocurrency!

A New Look for Coinhako